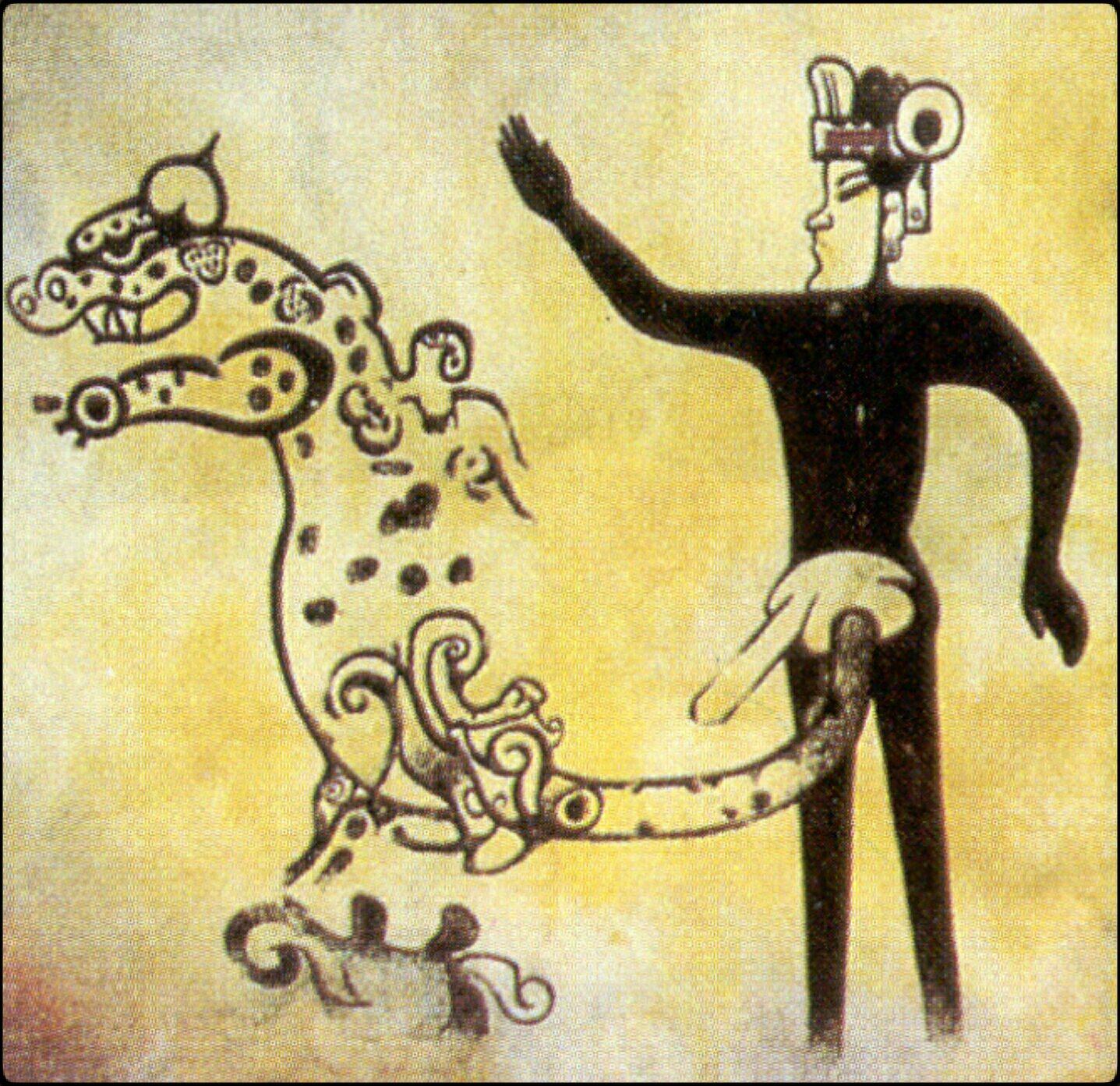 Ancient origins of the Hero Twins; the Were-jaguar

Oxtotitlán is the name of an archaeological site in the Mexican state of Guerrero featuring an ancient natural rock shelter, containing murals and motifs linked to the Olmec. The Oxtotitlán rock paintings there are said to represent the most sophisticated and earliest rock art paintings known in Mesoamerica thus far. It is not exactly known what group or society painted them or how the Olmec were able to influence painted art hundreds of miles away from the heartland of the Olmec. The various Oxtotitlán rock paintings have been estimated to date back perhaps to 900 c. BCE. 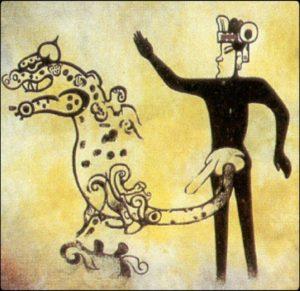 Of particular interest is a painting called the “North Grotto,” which features an “ithyphallic” man standing behind what appears to be a rearing jaguar. The man’s body is outlined in black, but in this image it is colored in black to better show his exaggerated genitals pointing towards the jaguar. This rock art image has led many to speculate it’s a man copulating with a jaguar, but Western historians and anthropologists continually misinterpret such images as a sexual act due to the misunderstandings of pre-Columbian ritual customs.

However, let’s be very clear here, the human is not copulating with the jaguar. Instead, the man’s spiritual life-energy is merging with the animals spiritual life-energy. It could even be interpreted that the human is manifesting or merging with his inner warrior animal spirit, becoming one and the same. This idea was a central concept in all ancient cultures and iconography, as it was at the very heart of their oral sacred teachings.

The “Ka” was believed to be part of the soul, the life-force of a person that survived and lived on after death. The Ka was/is a spiritual “twin” born with every man, said to live on after death. The Ka was confined to an existence in the tomb until it could rejoin the “Ba,” and travel to the afterlife. The tomb was therefore the temporary dwelling house of the soul.

The “Ba” was believed to be a part of the twin soul that could fly, able to leave and revisit the tomb of the dead person in the mortal world and in the Underworld. The Ba was said to return to the tomb until the Ka and the Ba were reunited in the afterlife; hence the significance and origin of the word “Kaba.”

Eventually, this oral tradition was subsumed into our current ideas of anthropomorphism which in and of itself, is still largely misunderstood and misrepresented. A great example of this is in the paradoxical stories of the “Hero Twins,” now lost to Antiquity, believed to have its roots in the oral legends and iconography of the “Were-jaguar,” or the “Olmec Twins and Jaguar.” 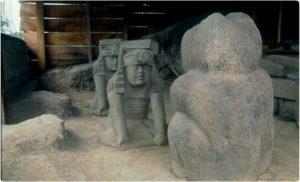 These three sculptures can be seen in situ of an Olmec archaeological site in Veracruz Mexico known as “El Azuzul,” where the twins face off with a Jaguar. Researchers believe that these sculptures haven’t been moved since Olmec times, referring to them in Latin as “pars pro toto,” meaning a part (taken) for the whole, which is a figure of speech where the name of a portion of an object, place, or concept represents its entirety.

Researchers have further suggested that these twins are the forerunners of the Maya Hero Twins from the Popul Vuh. These claims seem to only further validate the belief that the Were-jaguar is indubitably the origin of both our current mythologies and Religions, where good and evil face off. This can be seen in the word “El Azuzul,” El being a Northwest Semitic word meaning god or deity, and “Azuzul” being the word for fallen Angel in Judo-Christian doctrines. However, what many do not know is that Azazil is also associated with the “scapegoat rite” written about in the bible.

The scapegoat rite is about a goat who represents the symbolic removal of people’s sins and also, the literal removal of the goat. Once a year a bull would be sacrificed as an offering to atone for any sins committed unintentionally throughout the year. Two goats would be chosen by lot, one for “YHWH,” which was offered as a blood sacrifice and the other would be sent out into the wilderness. In a ceremony later that day, the High Priest would confess the intentional sins to God, while symbolically placing them on the head of the other goat, Azazel. As the scapegoat, Azazel would then, symbolically carry the sins of all the people within the community away. Over time, this symbolism became profaned as it got passed down through the generations, and our poor Pan God has carried the weight of our transgressions against nature and ourselves ever since.

Info sourced by both Latin American Studies and Wikipedia