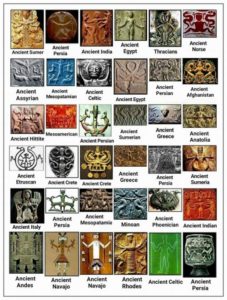 Anthropomorphic animals have shown up throughout our entire Ancient History through oral myth and iconic lore.

Anthropomorphic animal symbolism has long been known esoterically as a symbolic representation of higher self-attainment, honoring the physical manifestation of the primordial god(dess) within, representing regeneration, triple unity, the heroes journey, as well as, the twin pillars or the two witnesses (often referred to as Ida and Pingala).

These twin pillars are like that of the Zodiacal sign for Libra, or the symbol for Yin/Yang; perfect balance and harmony that must be maintained, for they are the foundational bricks that must be laid when the heroes journey begins.

When the soul yearns for something more beyond this physical realm, when it’s tired of the lies, bored of the mundane, is ready to face its shadow self, and is no longer comfortable conforming, a fire inside ignites.

Guided by this light, we can begin to rebuild our inner ark of the covenant, within the shadow of darkness a shining light awaits to be seen, and this lamp will be vital in aiding us as we build Solomons temple; our “Solo-Man’s-Temple.”

All religious text refer to our bodies as divine temples, they just need to be polished, and rebuilt. What is now thought of as only a metaphor, was once understood to be factual and literal within the context of a metaphor. The activation of the “Seven Churches” or the “7 Seals of Solomon” are what separate the human from the Super-human; a Superman.

These concepts and symbolic images have spanned the globe throughout our entire human history, cross culturally embedded within our nursery rhymes, fairy tails, folklore, mythologies, religions, and holidays (holy-days), but they have been cleverly veiled and esoterically concealed.

Ancient Greek religions and Mythologies were greatly influenced by the Minoan religion, a polytheism in a much larger group of religions from the Ancient Near east. Ancient greeks adopted the epithet of the Minoan Snake Goddess from Cretes prehistoric matriarchal religion (ca. 1700–1450 BCE).

The iconic Minoan snake goddess is also referred to as “Mistress of the Animals” (Potnia Theron: Ἡ Πότνια Θηρῶν). The word Potnia (mistress, queen, or goddesses), is the feminine counterpart to *Pótis (husband), and is a Mycenaean Greek word inherited by Classical Greek, with the same lexical meaning, as well as, Desponia (Des-potnia from PIE *dems-potnia), meaning Mistress of the House, cognate to Sanskrit Páti- (master, husband), and Pátnī- (lady, wife).

Demeter comes from Potnia and Despoina (Dems-meter from PIE *dems-méh₂tēr); Mother of the House. From a Lexical standpoint, this tell us Demeter descended from the Pre-Greek Minoan earth Goddesses such as Rhea (‘Ρέα “Ground”), and the Anatolian Mother Goddess Cybele (Matar Kubileya/Kubeleya); Mother of two Mountains. 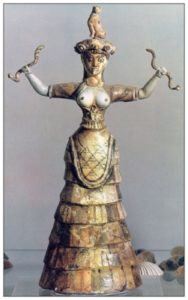 Mistress Of The Animals:

Master-Mistress of the Animals, King-Queens of the Two Mountains, and Master of the Reigns are all similar regent titles given to a number of ancient sky-earth God(desses), who were worshipped throughout the Mediterranean and Near east in ancient times. Homer referred to Artemis as “Potnia Theron” (Artemis of the wild land; Mistress of Animals).

The Arcadians believed Artemis was the daughter of Demeter and at one point she was the most venerated deity in Ancient Greek, as the goddess of hunting. Apollo was given the same epithet as Master of Animals.

The Master or Mistress of the animals symbolized the triple crown (physical, mental, spiritual-astral), an outward expression of god-like abilities for having mastered our dualistic nature, the animals within, thus obtaining dominion over the Zodiac; Ringmaster of the Circus (Greek “Krikos,” meaning circle or ring).

The Master of the reins, balancer and uniter of the micro and macro, within and without, was the builder of the arc, the one who controls both fire and water – he who rises from the ground, producing fruit upon his tree, was elevated to the gods (immortal), and given the honorific title… God(dess) of The Two Lands.