The Bible says of the serpent in Genesis 3:1;

” Now the Serpent was more subtle than any beast of the field which the Lord God had made “. Never is he called evil. The allegorical fall of man and his expulsion from Eden, in fact was the involution of spirit into matter. The same allegory is seen by the expulsion of Lucifer and his angels from Heaven.”

Numbers 21:8 And the Lord said unto Moses, Make thee a fiery serpent, and set it upon a pole: and it shall come to pass, that everyone that is bitten, when he looked upon shall live.

John 3:14, And Moses lifted up the serpent in the wilderness, even so must the Son of Man be lifted up: That whosoever believeth in Him should not perish, but have eternal life.

This, to me, is a clear reference to Christ’s “inner divine light”, and the serpent as being the same source, essence, and power. It is the regenerative primordial subtle energies in almost all teachings. It is the Secret Fire that the alchemists above all seek to accomplish their art. When it is coiled, dormant in the pit of self, it is inactive. When through mystical exercise it is aroused, and fanned from its embers into flames, it becomes an awesome spiritual fiery energy. As it is purified through the inner alchemical methods, it rises to the higher psychic levels and becomes the; consuming, uplifting, life giving, healing, purifying, transmuting, cosmic energy of life. In its ceaseless effort and striving to be, is the very source of being itself. It is the Awesome energy and power of the ever generation of universal life. This divine fire in man is his very divine inner nature. The fiery flames of Christ within as the saviour. The fire of the Gods. 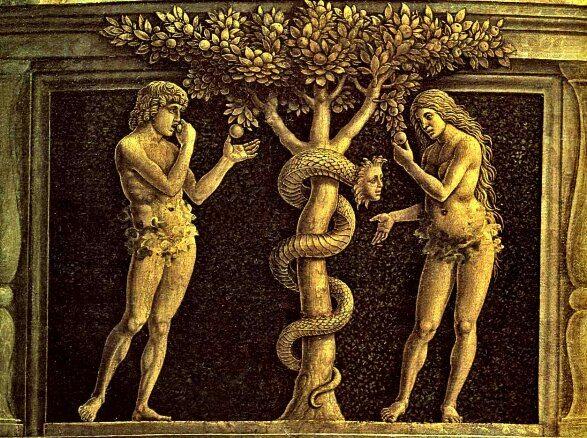 The pole, tree, or cross are one and the same thing. It is the body or matter. The serpents on a pole is the Caduceus , still used today as a symbolic emblem of medical centers. It is the divine energies infused, fixed and crucified in matter. Through matter, as a vehicle and receptacle, this spiritual consciousness evolves and unfolds. Likewise matter is transmuted and uplifted through the unfolding and evolving of this light within. The Rosy Cross of the Rosicrucians’ beautifully symbolizes this. The Rose in the center of the Cross represents man’s higher consciousness, unfolding itself as it is crucified in his body. The saying and statement reads, ” Ad Rosam per crucem, ad crucem per Rosam.” To my Rose by way of the cross, to my cross by way of the Rose.
“At the point in our investigation at which we have now arrived, we shall have to make some inquiry into that mysterious force said to be resident in man, which is so often called the Serpent Power. This is the Paraklete of the New Testament, the Speirema of the Greeks and the Sanskrit Kundalini.” ” The Secret Fire” by E.J. Langford Garstine ….. A must read for all aspiring alchemists .

“THE GREAT Magical Agent, by us termed the Astral Light, by others the soul of the earth, and designated by old chemists under the names of Azoth and MAGNESIA, this occult, unique and indubitable force, is the key of all empire, the secret of all power. It is the winged dragon of Medea, the serpent of the Edenic Mystery; it is the universal glass of visions, the bond of sympathies, the source of love, prophecy and glory.”