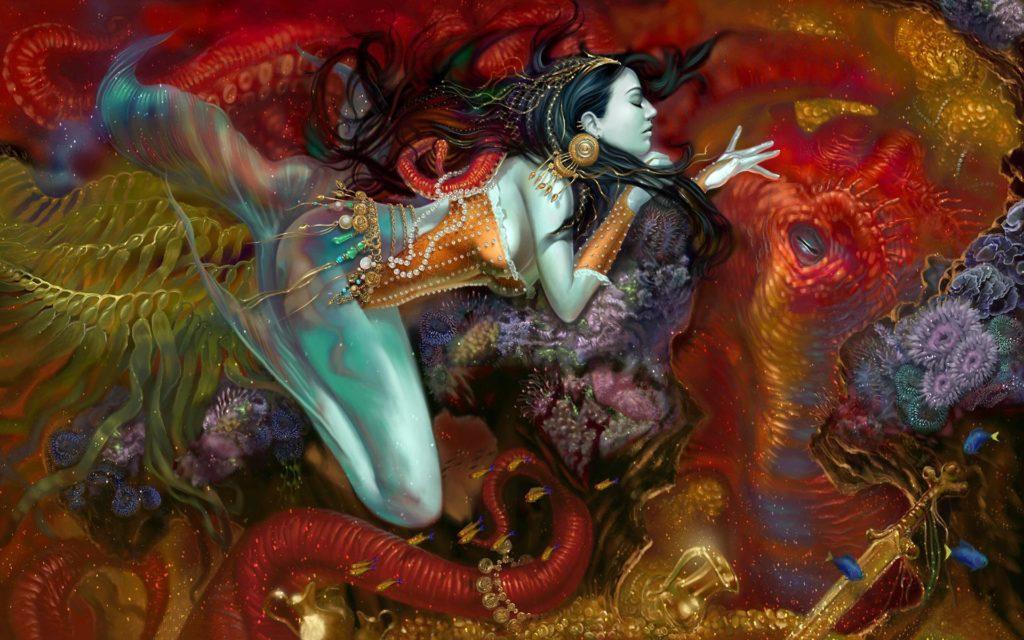 Do you believe in Fairies and Mermaids? Do they really exist? For centuries these elementals or nature spirits have been thought of as pure myth, no more than children’s fables. But to Paracelsus they were very real and he grouped the elementals in four categories: gnomes, undines, sylphs, and salamanders. Perhaps you can already deduce that the four categories of element(als) correspond to the classical elements of : earth, water, air, and fire. Paracelsus believed that these mythic entities existed in the finer realms of the invisible or finer nature of the elements. He concluded that these beings were not only composed of finer astral aspects but they too ate, slept, and had flesh and bone bodies. Another theory to be considered is that of Franz Hartmann, in an esoteric stance he stated that the elementals lived in the soul-realm of man. He implied that if a person had a moral affliction it would manifest as an animal or an animal with a human head. His expression conveyed that these animal forms mirrored a human vice such as greed, envy, hypocrisy, cunning, fear and etc.

Mythic Creatures and The Elements

The Sprites of fiery Termagants in Flame
Mount up, and take a Salamander’s name.
Soft yielding minds to Water glide away,
And sip, with Nymphs, their elemental Tea.
The graver Prude sinks downward to a Gnome,
In search of mischief still on Earth to roam.
The light Coquettes in Sylphs aloft repair,
And sport and flutter in the fields of Air.

— Alexander Pope, the Rape of the Lock

It was said that most elementals were of good character but some were evil(daemons). They are not believed to be immortal but can live 300-1000 years. When conjuring an entity in ceremonial magic, essentially it is an elemental who is being conjured and they belong to one of the elements above. The type of elemental that was invoked by a magician relied solely on the type of magic the magician practiced.

Why can’t we see these elementals? In this theory it is expressed that because they are partly made up out of the finer realm and we have not transcended our gross or material state we are not able to see or come in contact with them. They are in middle realm between matter and spirit, they are half one and half of the other. Further reading can be found in Franz Hartmann’s works Philosophia Occulta (a translation of the work of Paracelsus) and Magick White and Black.

January 19, 2016
Previous Post New Years Resolution(s) and The Power of Mind
Next Post Symbolism of The Serpent