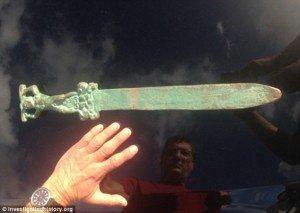 Recently a Roman era sword was found on Oak Island on Canada’s East Coast. Some are left wondering what this could mean because it does not fit into the traditional model of history. But the Initiate that seeks answers to the resting place of the legendary Ark this piece goes a long way to solving the puzzle. We will try and explore this mystery with a Magi twist that may not have ever been considered before.

Long ago Biblical accounts portray the Ark as one of God’s greatest gifts to mankind. An impressive piece of ancient technology with the powers of creation and destruction. If many of the Old Testament figures were following the Magi traditions of the winged disk. Then this Ark given to humanity may also be the greatest tool in the Magi arsenal.

Throughout history the Ark was used for offence and defensive purposes. If used correctly it could aid an insignificant number of people into an unstoppable force. But if not used properly its powers could turn deadly even on those attempting to wield it. 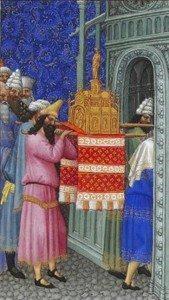 Ark carried into the Temple from the early 15th century

Ark carried into the Temple from the early 15th century
Eventually the Ark ended up in King Solomon’s temple as its last official known resting place. Then a siege came by Nebuchadnezzar II and he concurred the temple so the Ark had to been moved. Some say the traditions states that the Ark must always move west. So from the old world to the new it traveled with those following Mithra. These early era Romans attributed Mystery Religion known as Mithraism to Persian or Zoroastrian sources relating directly to the core of the Magi.

Its final resting spot for some time was the Oak Island Money Pit located in Canada. It arrived on this Island much sooner than some would even think possible. This Roman Era sword found on the Island could confirm this to be true. It likely remained here until the Magi tradition could establish itself in America. Then just as Albert Pike wrote in his book Morals and Dogma, Ahura Mazda whose symbol is the Winged Disk is the secret meaning to Freemasonry. Meaning secretly some of the founding Fathers of America were loyal ancient God of the Magi going all the way back to Sumeria and the Annunaki.

Franklin Delano Roosevelt is said by many to have been a Freemason and began participation in the Oak Island Mystery in late 1909. During his time as the President of the United States 1933-1945 he may have had the opportunity to oversee a secret vaults construction under the White House. We do know after his term was over a rebuild was completed under President Truman. This theory imply’s the Freemasons removed the Ark with the help of the secret Magi technology in the cover of dark. Then the pit was reburied with some decoys while the real Ark was moved west to it’s new home the American Capital. Meanwhile a cover story’s were given to the press that the treasure seeking attempts failed on the Island and whole idea may have just been a myth.

Could it be the Ark has sat hidden from the general public for decades in secret vault under the White House ?What better location to hide it but in plain sight. Maybe only those top ranking members with the Freemasons loyal to the Ancient Bloodlines are permitted to see it or even really know of its location. Maybe the most telling proof this could be true is the myth of it’s power aiding the United States. Now the Adept Initiates know it could be true what ancient account say that the nation that holds the Ark of the Covenant will remain dominant until it is taken from it. We will have to watch if this Roman era sword on the Oak Island will not be the last evidence to surface that could support this Ancient Magi Ark connection.

The Symbolism of The Nativity Scene As An Alchemical Allegory