For as long as ancient beliefs have been passed down, mankind has committed violent acts against one another claiming to have the absolute truth behind existence. What in theory is supposed to represent righteousness and kindness to one’s fellow human, continues to keep us divided to this day. How then, should humanity ascend beyond this stage and begin to converge towards unity? How can anyone claim to have absolute truth, above all others, without absolute proof, no doubt, forcing his belief on others who are just as convicted?

The time has come where we as humanity should explore the commonalities amongst the ancient legends, myths, and beliefs as well as amongst ourselves rather than war over our differences. Within these similar aspects, we will find a path towards truth, much greater than the polarities we have been stuck on for eons.

There are numerous examples where disconnected cultures, by both geography and time, seem to share particular aspects of the stories they have carried on for generations. One such example are the stories from the Book of Genesis having great parallels to the cuneiform epics of the Sumerians/Ancient Mesopotamians. Stories such as the creation of man, failure to gain immortality, and the great flood have been noted to have amazing commonalities between these cultures, yet the Sumerian writings predate the biblical ones by hundreds of years. In fact, the legend of the great deluge, described in the Epic of Gilgamesh and the Book of Genesis, have similarities to other flood myths from all over the world and from different times in history. This is but one clue in the mystery of our common and hidden past.

There are also the stories of extremely long lifespans, lasting hundreds and sometimes thousands of years. Such extraordinary lifespans have been recorded by the Sumerian King List, describing reigns of individual kings lasting for thousands of years, prior to the great deluge. This is similar to the Old Testament patriarchs living much longer than anyone that modern man has ever known of. When we continue to explore this topic, we discover that the ancient Vedic culture passed down their beliefs, some of which are still shared by Hindus in India today, a concept known as Yugas. These Yugas are extremely long epochs, which are part of a four age cycle that repeats itself. Within 3 of the 4 Yugas, mankind was believed to also have extremely long lifespans as well as great knowledge.

Just as the ancient Vedic culture believed that the Earth, and in particular humanity, goes through transitions from one age to the next, so do the Hopis, a modern tribe of native americans who have inherited this legend from their ancestors. They believe that we are now or soon will be entering the 5th world or epoch. The Mayans are another ancient culture, which inhabited Mesoamerica and northern Central America, who also formed a belief structure around these cycles of man. In fact, recent scientific findings have corroborated such beliefs with the periodic calamities the Earth has faced, mass extinctions, and ice ages.

When reading about these ancient legends, we can also find a common theme of gods or supernatural men who once inhabited and ruled the world. These advanced beings were told to have passed down their knowledge to the current form of humans, much of which has been lost through time. Another common element is the belief that one day, a saviour or moment in time will come, revealing the hidden truth, enlightening us all once again.

Rather than sit around and wait for such a glorious time, I propose that we set aside our differences and work together to bring on such an age, one of mutual respect and admiration. Although violence persists, there are others who are now turning towards unity, only taking on the positive lessons of our ancestors and belief systems. There are countless other related stories among the cultures of the world, yet to be uncovered, and this new age has already begun.

About the Author: Alex Teplish is the author of “In The Beginning : The Epic of the Anunnaki”, which explores the parallels between the Ancient Sumerian Legends and the Book of Genesis, but from an extraterrestrial point of view. This fully illustrated story visualizes what many ancient astronaut theories have posed and asks “What if it was all misunderstood?”. 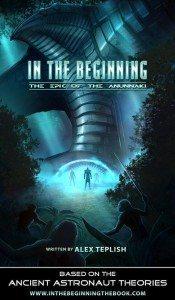 In The Beginning The Epic of the Anunnaki

About “In The Beginning : The Epic of the Anunnaki”:

Ancient Legends, myths, and religions from around the world have spoken of gods and angels, not always in the spiritual sense, but actual flesh and blood beings interacting with mankind. Many of these ancient cultures had vast knowledge of mathematics and astronomy, attributing their knowledge as being handed down from the gods. Who were these god-like beings, known to one of the oldest civilizations, the Sumerians, as the Anunnaki? This two-part story starts with an amazing discovery in the present day that takes us back hundreds of thousands of years. Follow the Anunnaki on their ancient astronaut journey From Nibiru to Earth and their interactions with humanity’s genesis.