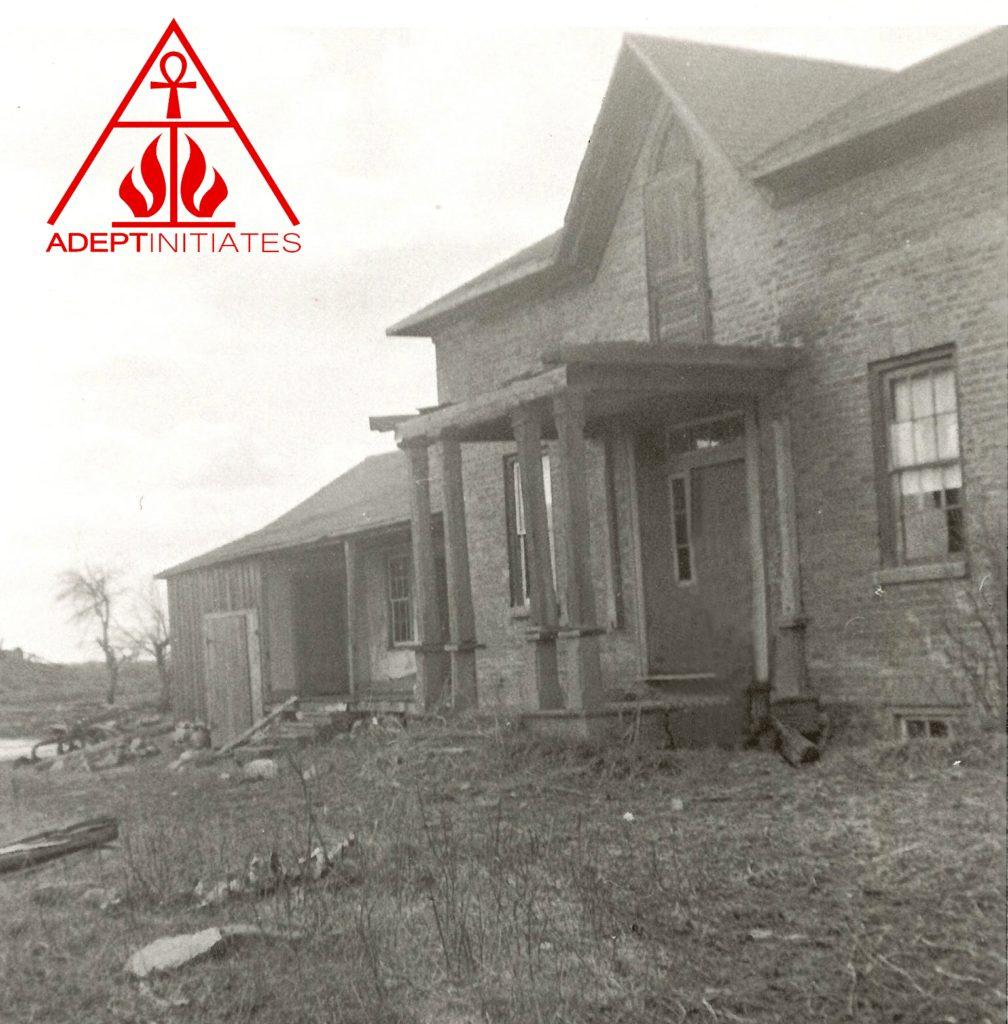 Mystery of the Canadian Anubis Amulet begins on a small farm. Found by a child crawling inside a spot much to tiny for any adult to fit. Now nearly 50 years later Initiates get a closer look at it’s history. First we check other ancient tales to see if any more have a dog to match.

Ancient Dogs around the World

In ancient Greece Hecate is seen with ghosts, knowledge, sorcery and dogs.  Yet her origin is linked to ancient Thrace and Phoenicia.  In addition a Hecate dog amulets also offered spiritual protection. While in other parts of Europe dog amulets were used for ceremony and daily routine. In China Foo Dog statues have protective benefits. Most noteworthy seen in pairs just like Sumerian cherubim. Meanwhile in ancient America the nobles kept Techichi . The ancestor of our chihuahuas. Opposite in the far north dogs were used to pull sleds for transportation. Some examples here sound similar to the Canadian amulet but next we check Anubis.

Especially relevant Anubis was shown as a full animal in Egypt 3100 BC.  Many believe to be a jackal. Earliest text mentions Anubis in 2686 during the burial of a pharaoh. He remained the most important god of the dead until approx 2000 BC . After which he was replaced by Osiris in the Middle Kingdom. Some consider Anubis to be the son of the cat-headed Bastet . A story covered in the Magi of Strandja Mountain. Also one of his roles in First Dynasty was to protect graves. He also guided souls to the scales of judgement. Where only the light of heart can continue.

While the height of the amulet is 2.75 inches tall. Its flat and some of the black paint has worn off. So you can see it’s silver colored metal. When tested with a magnet it stuck yet it shows no sign of rust. Since Anubis has black fur this paint is a match. Also the eyes on both seem to share the same style.  Furthermore the ears both have been made to point straight up. On the statue we see rib lines clearly defined. And on the amulet it has the lines visible on the back. We find a spot on the Amulet open for tying the same ribbon. The only difference is the Amulet has a open mouth. So next we check to see if there is any reason this Anubis has a open mouth. 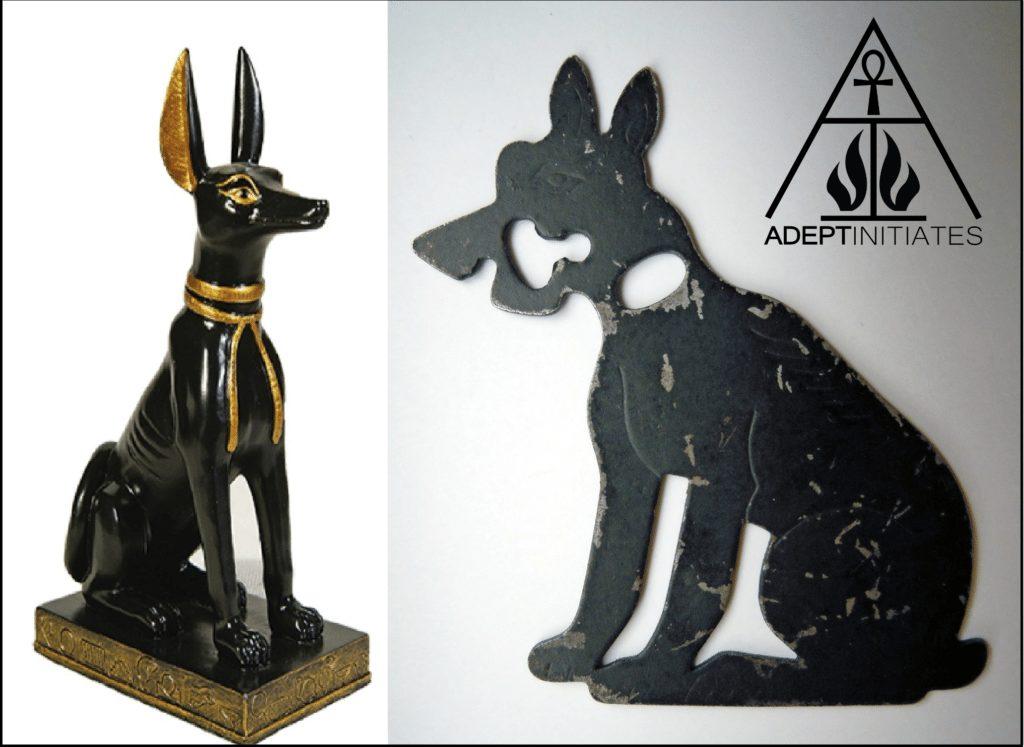 In the tomb chamber, a magic brick with an amulet of Anubis representing the god should be placed on the west wall, facing east to the mummy of the deceased. In this role, the seated jackal Anubis is protecting the dead from any aggressor ”   —  Spell 151 of the Book of the Dead

Anubis Amulet and Opening of the Mouth Ceremony

Maybe original to this Amulet we find Anubis with a open mouth. Although he is often shown opening the mouth of others after death. It seems rare to find him in the same position. Probably something that really makes this Anubis Amulet stand out. Just who was this artist ? And what had inspired them to make the mouth open in this fashion ? We may never know…. 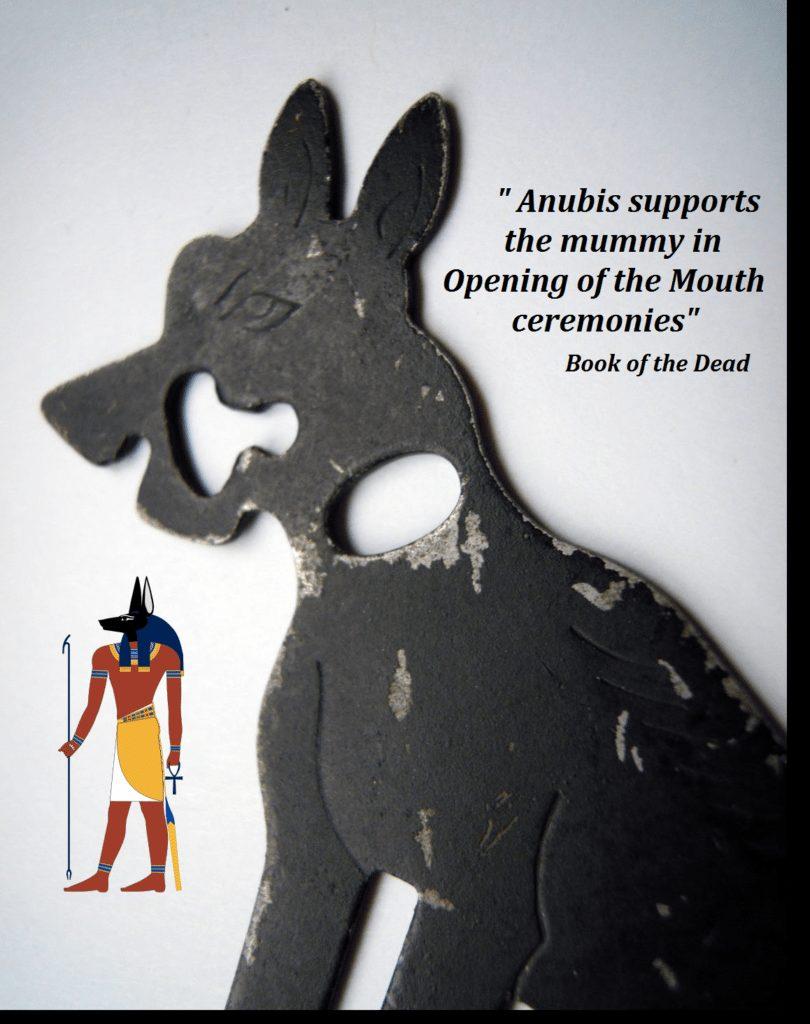 Anubis Amulet and the Offering Table 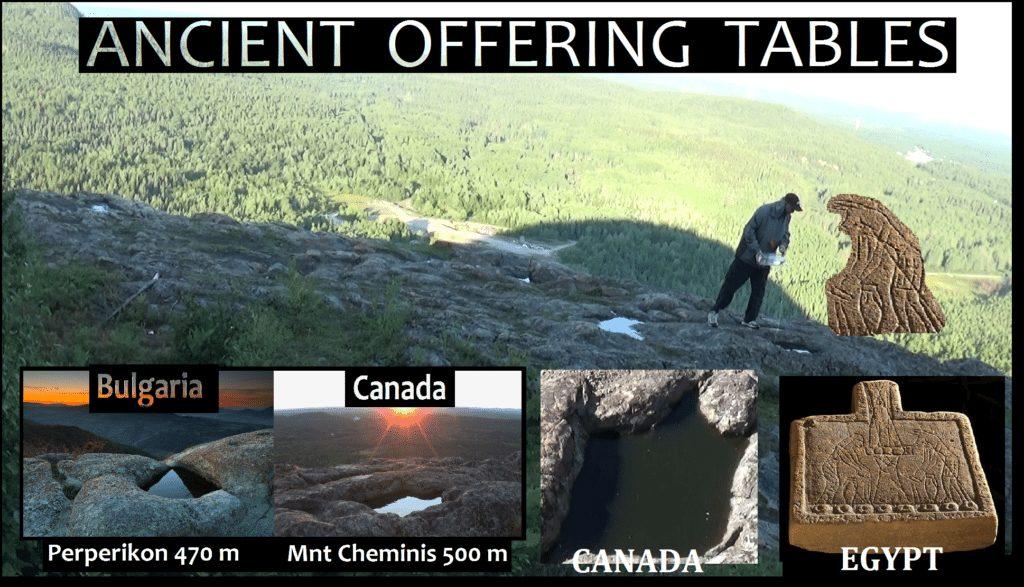 Not far from the offering table in Bulgaria we find a man made underground chamber. One theory suggests it is a observatory to view the stars. Just like the star gazing Magi would have used. With obvious care the opening at the bottom had been carefully shaped. Nearly the exact same form as the Canadian Anubis Amulet. This would appear to link the Amulet to not only Egypt. But also the offering tables in Canada and Bulgaria. 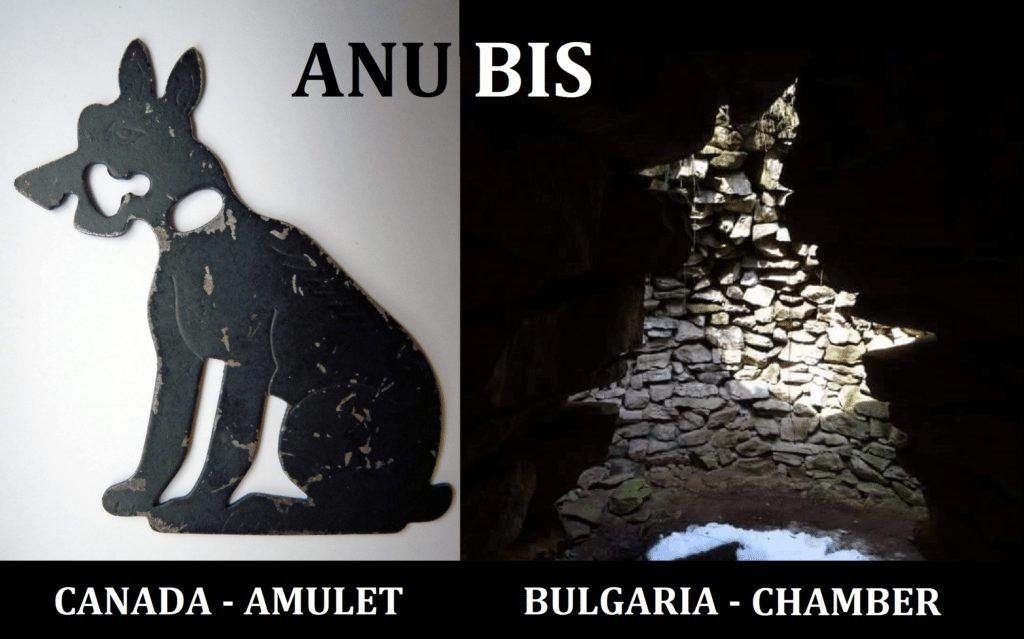 The two witnesses in this case have good reputations in the community. For security they remain anonymous and will be called Jane & Jill for the questions.

Leland: When was the Amulet hidden in that old house ?

Jane:  Since the building would be early 1800’s and  I found it in the early 1970′ s. It has to have been placed there between those years.

Leland: Do you know who the former owner of the farm house was ?

Jane: The farm sat empty for a long time and was known as the “haunted house”. I don’t know anything before then.

Leland: How exactly did you find the Amulet ?

Jane: As a little kid, my friend and I would climb up into the antique warming oven. It was just big enough for us to sit in. One day I was digging in the sooty corner and found that. It seemed to us that it was hidden there. The way this thing was hidden, I don’t think it was meant to be found.

Leland : Do you encounter any paranormal activity near the Anubis Amulet ?

Jill : I don’t have problems in the house now that it’s up on the brick wall. But at one point in time when it was kept in the China cabinet I could hear muffled voices at night. And got very uneasy being watched feelings. But thankfully it stopped ! Once it was put on the brick wall facing East.

Psychometry of the Anubis Amulet

First of all psychometry is a form of extrasensory perception. While saying objects carry a readable energy field. Although criticized some can give a very detailed history from a object . Even just from it’s touch. American physician and professor of physiology at the Eclectic Medical Institute Joseph Buchanan coined the term. This Canadian Anubis Amulet seems enchanted with the energy of an ancient spirit guide.

psychometry would affect the many various branches of science. It also would elevate the various schools of philosophy and arts thereby affecting wide social change and ultimately an enlightenment of humanity”    — Manual of Psychometry: the Dawn of a New Civilization (1885)

As a result of magnetic tests on the metal it is most likely a very old replica. Maybe a small token handed out to Freemasons early in American history. One can only guess if these amulets really do offer a type of magic protection. Hence our evidence suggests this Amulet is modeled after Anubis.  Due to the dog shape, color and markings make it appear as so. In addition the symbol for the opening of the mouth ceremony. If the Amulet is genuine Adept Initiates maybe first to see a ancient relic. Maybe carried to the new world by the Phoenicians from Bulgaria. Thus the Anubis Amulet may shed light on a occult protection technology. And a forgotten chapter in the history of Egypt. 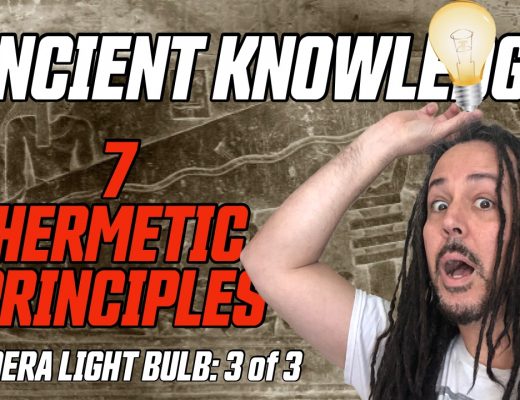 October 25, 2015
Previous Post Winter Solstice-Coming Out of the Darkness
Next Post The Tree of Knowledge and The Christmas Tree