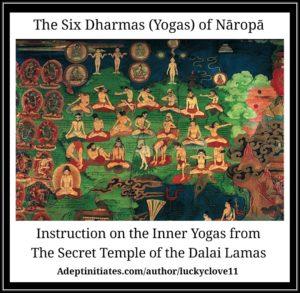 THE SIX DHARMAS OF NĀROPĀ:

NĀROPĀ, GUARDIAN OF THE NORTHERN GATE: 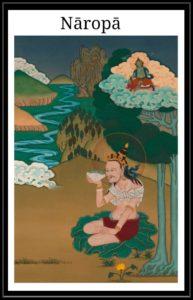 Nāropā (Prakrit; Sanskrit: Nāropadā or Naḍapāda) was an Indian Buddhist Mahasiddha, born to a high status Brahmin family in Bengal, and is said to have died sometime around ca. 1040. Nāropā was a disciple of Tilopa for twelve years, and is considered one of the eighty-four Mahasiddhas (saints of Vajrayana), gaining the title “Guardian of the Northern gate.” The Vajrayana tradition (also known as Tantric Buddhism, Tantrayāna, Esoteric Buddhism, and the Diamond Vehicle) is said to have been given by the Buddha, passed down through an unbroken lineage via Tilopa to Nāropā, and so on… onto the present day.

“Naropa underwent what is known as the twelve minor hardships in his quest to find his teacher, all the hardships being hidden teachings on his path to enlightenment. When he finally met Tilopa, he was given the four complete transmission lineages which he then began to practice. While studying and meditating with Tilopa, Naropa had to undergo a further twelve major hardships, trainings to overcome all the obstacles on his path, culminating in his full realisation of Mahāmudrā. Naropa spent a total of twelve years with Tilopa. At the bank of river bagmati, in the premise of Hindushrine Pashupatinath Temple, there is the cave where he was initiated by Tilopa and attained Siddhi.” [2] 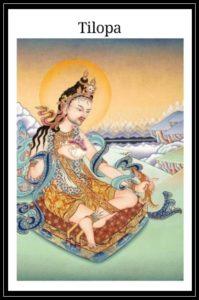 Tilopa (Prakrit; Sanskrit: Talika or Tilopada 988–1069) was an Anuttarayoga Tantric practitioner and Mahasiddha. Tilopa attained Siddhi (complete understanding and enlightenment) inside one of the greatest Hindu shrines of Nepal, the Pashupatinath temple, where he also initiated his main student, Nāropā. Tilpoa gave Nāropā a teaching called the “Six Nails of Key Points” (Tibetan gnad kyi gzer drug), which appear to have had a great impact upon Nāropā’s later teachings. 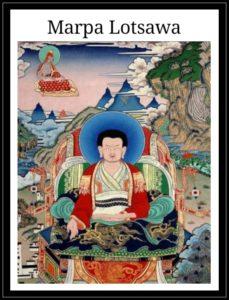 Marpa Lotsawa (Lhodak Marpa Choski Lodos), also known as Marpa the Translator (1012–1097), was a Tibetan Buddhist teacher, who has been credited with the transmission of many Vajrayana teachings from India, including the teachings and lineages of Mahamudra and Kagyu (oral lineage or whispered transmission). After Marpa Lotsawa received full transmission from Nāropā, he declared him to be his successor, and Marpa Lotsawa would later go on to teach the Six Dharmas of Nāropā, as well as, making great contributions to the transmission of the complete Buddhadharma to Tibet. [4]

THE SIX EXERCISES OF NĀROPĀ: 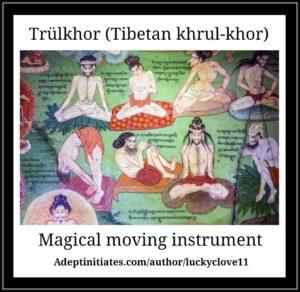 Now, before engaging in the actual practices of the Six Dharmas, the student is to become proficient in the Six Exercises of Nāropa called, Trülkhor (Tibetan ‘khrul-‘khor), meaning “magical moving instrument.”

MEDITATION ON THE BODY AS AN EMPTY SHELL:

Here the body is envisioned as being entirely without substance, appearing in the mind like a rainbow in the sky. This meditation and the physical exercises listed above should be practiced in conjunction with one another. How will you know when you are ready to move onto the Six Dharmas? Although obscure, it is said there are five signs that will arise for the practitioner, which can only be known through personal experience of inner illumination, they are: 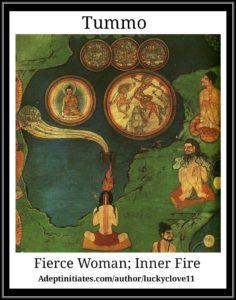 Tummo is the Yoga of inner heat, a form of breathing practices aimed at controlling and directing our inner fire, which is a necessary process of the body during the completion stage of ‘highest yoga tantra’ (Anuttarayoga Tantra or Anuyoga).

In 1995 Miranda Shaw published a book through Princeton University Press called, Passionate Enlightenment: Women in Tantric Buddhism, where she discussed the benefits of  working with Tummo and Kuṇḍalinī energy saying,

“Kuṇḍalinī-yoga offers a range of techniques to harness the powerful psycho-physical energy coursing through the body… Most people simply allow the energy to churn in a cauldron of chaotic thoughts and emotions or dissipate the energy in a superficial pursuit of pleasure, but a yogi or yogini consciously accumulates and then directs it for specified purposes. This energy generates warmth as it accumulates and becomes an inner fire or inner heat (candālī) that [potentially] burns away the dross of ignorance and clinging of the ego.”

Dr. Arya, a renown expert and author in this field says,

“The psychic heat Drod is produced by the space particles and the heat manifested from the friction of the wind element. This is another fundamental element as it supports and gives power to the consciousness, like the power of the fire that can launch rockets to space. The power is called medrod or ‘digestion fire’ in medicine and Tummo in yoga tantra. The heat (fire) sustains life and protects the body/mind. The psychic fire increases the wisdom, burns the ignorant mind of the brain and gives realization and liberation from the darkness of unawareness. That is why yoga describes Tummo as the aggressive fire which ignites from below navel, pierces the chakras one by one and reaches the sky of the crown chakra. The tummo burning arrow married with the celestial bride leads to enjoy the life of transformation of samsara. They give birth to the son of awareness from the blissful garden of Vajrayogini.” [7] 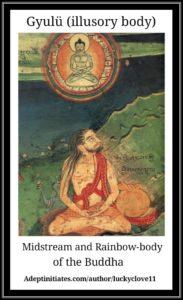 GYULÜ is the Yoga of the illusory body, a guarded practice used to generate the rainbow-body of the Buddha, giving rise to the midstream or consciousness that sees reality as it really is. Melong (Tibetan term that means mirror or looking glass), is an ancient symbol throughout Indian, symbolizing clarity, wholesome or complete perception, and primordial purity of the mindstream. The mirror may be used as a tool in the advanced tantra sadhana of the Gyulü. As the mirror, so the mind, and the mirror as the mind reflects quality and form, though is not directly altered and is beyond all attributes and form (Sanskrit Nirguna).[8] 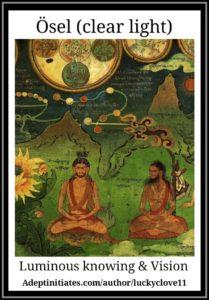 Ösel is the Yoga of Luminosity and the clear light or radiant light. Often, a spontaneous luminous aspect of our all knowing mind that arises from awareness (rigpa); the original state of our vast and universal mind, beyond all thought.

If one has the ability to remain conscious during deep sleep, one will be able to recognize the luminosity of death and gain Buddhahood, this is called the meeting of ‘mother and child luminosities,’ resulting in the state of “thuktam” at death. [9] 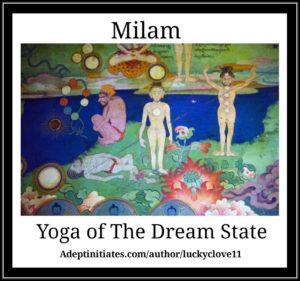 Milam is the Yoga of the dream state, or dream yoga. In the tradition of the tantra, dream yoga is usually passed on by a qualified teacher to his/her students after necessary initiations. Various Tibetan lamas are unanimous that it is more of a passing of an enlightened experience rather than any textual information.

Buddha Shakyamuni often told his disciples to regard all phenomena as dreams. He used many examples, like an echo, a city in the clouds or a rainbow to illustrate the illusory nature of the phenomenal world. Dreams represent just one type of illusion. The whole universe arises and dissolves like a mirage. Everything about us, even the most enlightened qualities, are also dreamlike phenomena. There’s nothing that is not encompassed within the dream of illusory being; so in going to sleep, you’re just passing from one dream state to another.

Shugchang discussed the importance of lucid dreaming to the practice of Dream Yoga, pinpointing its four stages:

“In order to make the time we spend dreaming more meaningful, we must first recognize that we are dreaming. That is the initial exercise. The next step is called transforming the dream; the third is known as multiplying. The fourth practice is to unify the dream with the clear light. Recognizing, transforming, multiplying and unifying the dream with the luminosity of the true nature; these four outline the essential applications of dream yoga.”

Yuthok says, “people who have practiced dream yoga have been able to visit teachers they missed and travel to lands they never managed to get to in the waking state. The dream state is a very pure state of mind. Namkhai Norbu gives advice, that the realization that the life is only a big dream can help us finally liberate ourselves from the chains of emotions, attachments, and ego and then we have the possibility of ultimately becoming enlightened.” [10] 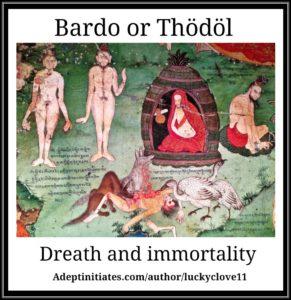 Bardo is the Yoga of the intermediate, transitional, in-between, or liminal state. According to Tibetan tradition, after death and before one’s next birth, when one’s consciousness is not connected with a physical body, one experiences a variety of phenomena. These usually follow a particular sequence of degeneration from, just after death, the clearest experiences of reality of which one is spiritually capable, and then proceeding to terrifying hallucinations that arise from the impulses of one’s previous unskillful actions. For the prepared and appropriately trained individuals the bardo offers a state of great opportunity for liberation, since transcendental insight may arise with the direct experience of reality, while for others it can become a place of danger as the karmically created hallucinations can impel one into a less than desirable rebirth.

THE SIX BARDOS OF TIBETAN BUDDHISM ARE: 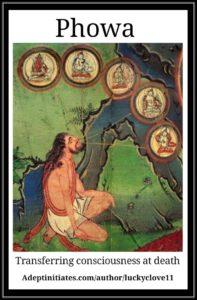 Phowa is the Yoga of transference, a method to be applied at the moment of death where one transfers their consciousness through the top of their head directly into a Buddha-field of one’s choice. Phowa is also performed by specialists on behalf of the deceased, as a post-mortem ritual. In Shugchang exegesis of the ‘Zhitro’ he discusses phowa in Dzogchen saying,

“Phowa has many different meanings; in Tibetan it means “transferring consciousness.” The highest form is known as the phowa of the dharmakaya which is meditation on the great perfection. When you do Dzogchen meditation, there’s no need to transfer anything, because there’s nothing to transfer, no place to transfer it, nor anyone to do it. That’s the highest, and greatest phowa practice.” [12]

A word of advice, these are very advanced teachings so, if your mind, body, and spirit are not properly prepared it can cause you great harm. I highly recommend seeking out a trained master or Guru to help guide you if you do not already have one. Trust me, I learned this painful lesson the hard way, and I wouldn’t wish it upon my worse enemy. Wanting instantaneous results and immediate gratification will only bring about set backs that can ultimately cause you a great deal of pain.

These teachings are only meant for initiates who have properly prepared their mind, body, and spirit, and after many years of inner work are in a place to begin creating their Rainbow body. You must remember, we are electrical beings, and if you attempt to raise your electrical current too fast or too soon, and without proper preparation, you can experience both temporary and permanent neurological damage, not to mention depression, anxiety, and all over pain that no doctor will be able to properly diagnose, which can ultimately lead to a psychotic break down, or insanity so, please use proper care and preparation before beginning any of these practices.

I have shared with you a very basic, but very thorough outline on how to attain Buddhahood, as taught by the greatest masters and unbroken Buddha lineage… the rest is up to you!

You can find further information regarding this topic at: http://www.sacred-texts.com/bud/ettt/index.htm

Click on the image below for a supplementary book: 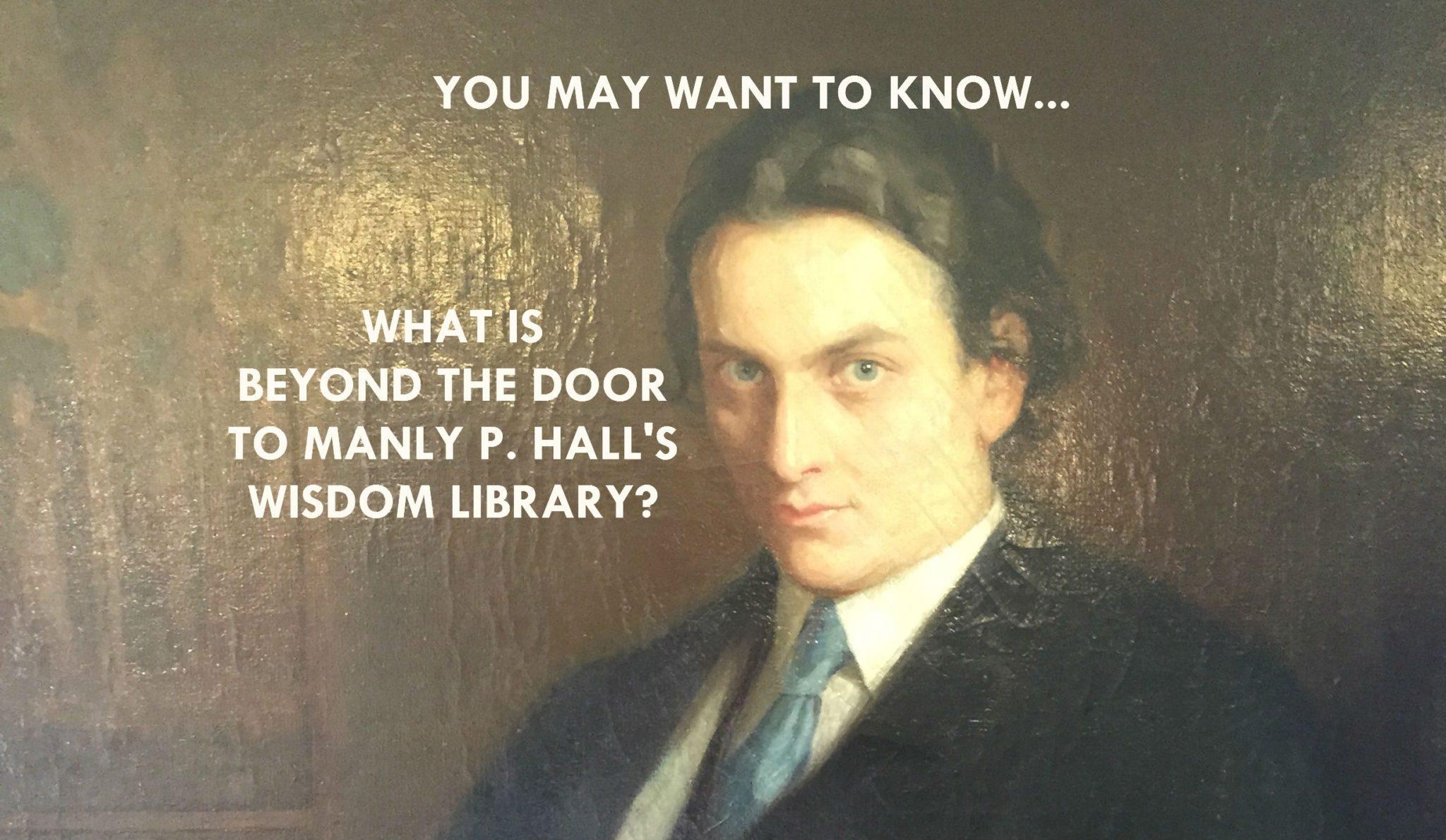 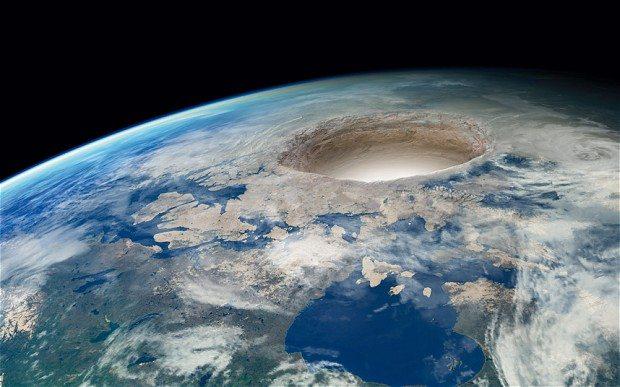 October 31, 2016
Previous Post What is the symbolic meaning of The Sacred Ashtamangala?
Next Post THE SEVEN TRADITIONAL METALS OF THE ALCHEMISTS AND THEIR TRANSMUTATION PT 5