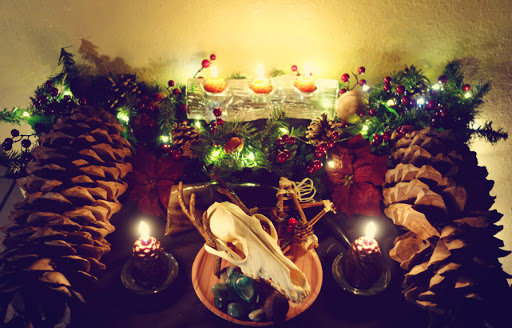 Who doesn’t love a good dark story? But why tell a dark story on Christmas when everything is bright and cheery you ask? The new rehashed religious Christmas started to become popular in the 19th century. But to keep Christmas traditional we have to go to it’s pagan roots and they go deep. From Babylonia, Rome, Mexico, and around the globe, this holiday was based on nature and celestial worship.

Most of western society celebrates a contemporary conceptualization of Christ-mass but this holiday has ancient pagan origins. Christmas is an ancient tradition that has its roots in sun worship. It is no accident that the holiday falls on the same week ast the Winter solstice when the sun is reborn. Ancient traditions are filled with vast mention of sun principles: the Hindu Sun God Krishna, the Egyptian Horus, the Greek Helios, the Persian Mithra, the Druidic Hesus, and the Nordic Yule.

The Yule celebration starts during the winter solstice. The return of the longer days is brought in with gift giving, feasting, and merry-making. Yule marked the begining of the new year when the focus shifted from inward reflection to outward manifestation.  The word Yule comes from the old Norse Jól-Jólablót and Old English Geohol. This is where the word Jolly is derived from.

Besides the Christmas tree there was a number of other plants associated with Christmas. The Holly is associated with sacrifice and the blood of Christ. Mistletoe is associated with the death of Balder in Norse traditions and it was revered by the ancient druids because it stayed green all year round. This parasitic plant would be hung on the door to ward off evil, this strikes a similarity to the evil eye charm.

The Yule log provides light on the darkest time of the year. The yule log is not for decoration but for protection. The log must burn continously for twelve days. During that time it keeps away malicious spirits-feys as long as it stays lit. If the fire goes out portals are laid bare, it is an invitation for spirits to reek havoc.

The ashes of the Yule log were potent and they were used in blessing rituals.

The log would also become and oracle. They would watch the fire and coals of the Yule log to predict who would give birth or die in the coming year.

For Yule we replace jolly Santa with the Norse deity of battle called Odin. The Midwinter cycle was associated with Odin’s Wild Hunt which was a ghostly procession of the winter sky. During this procession the veil between worlds was thin. This is when undead beings called Draugar walked the middle plane.

Yule was celebrated in Germanic countries with animal sacrifices where the sanctified blood was then used to paint the altar and the supplicant himself. “He was washed in the blood.”

The animal that was sacrificed(goat or boar-the christmas ham etc) was then eaten during the feast.

“Indeed under the law almost everything is purified with blood, and without the shedding of blood there is not forgiveness of sins.”

With Saint nicholas we have his helpers that include Knecht Rupert, Krampus, etc. In American Christmas, kids on santa’s naughty list get coal in their stockings. But Austrian Christmas? Naughty kids are beaten to a pulp with reeds, stuffed in a sack, and eaten alive by “Krampus” a half goat half demon sent to punish children who deserve it. Krampus did not come to give but to take!

On December 5th is Krampusnacht or “Krampus Night” when men dressed as Krampus drink alcohol, run through the streets, and chase naughty children around and beat them with sticks.

This tradition is Pre-Christian and goes back to pagan lore.

Christmas is For Ghost Stories

Long before stories of reindeer and elves became commonplace, there were ghost stories. Contrary to popular belief Charles Dickens did not create the Christmas Ghost story “A Christmas Carol”. Dickens took an already existing folklore tradition and brought it to the mainstream. When we review older tales of Christmas we find stories about witches that rode the night air while cursing the birth of the savior. There are also stories about fairies, ghosts, and devils that come to cause chaos during Midwinter.

The Light in “Dark”

Also, keep in mind that those things that seem “dark” shine the most light on truth. Perspective is everything.

No matter how you celebrate the Midwinter festivities:

May this winter bring solace

May this winter bring health

May this winter bring comfort

May this winter bring wealth

Let the wheel turn, may the sun return. 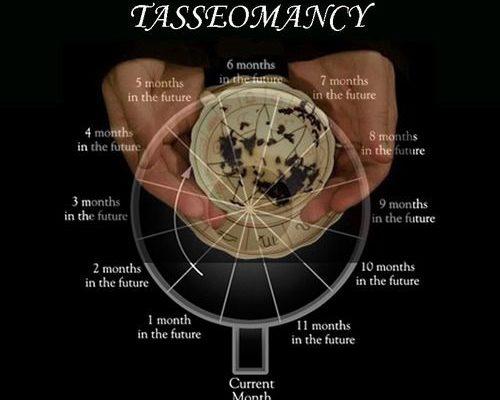 What Can You Discover in The Getty Alchemy Exhibit?

February 5, 2017
Previous Post Clash of The Titans: Jupiter and Saturn Conjunction
Next Post Are We Really In The Age of Aquarius?