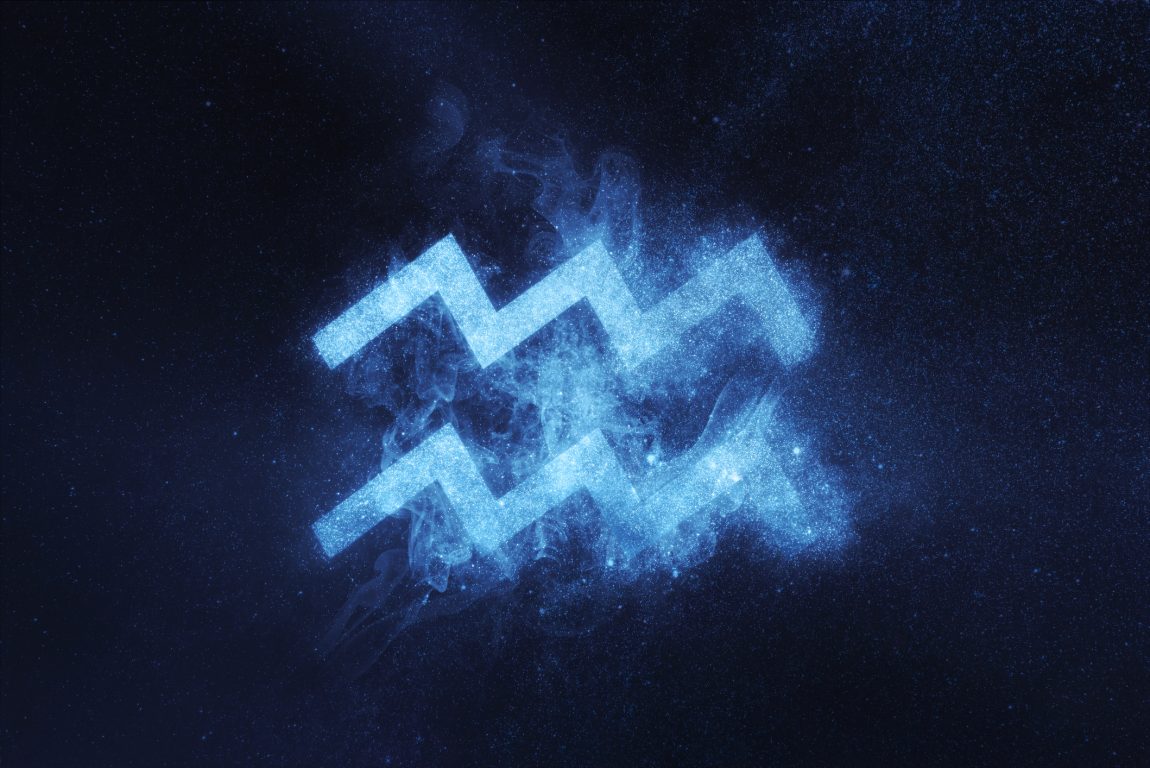 The Age Of Aquarius ▽

I have recently received inquiries from a few people about the Age of Aquarius and when it begins. Typically, I would consider this rapid succession of people asking me a solid synchronicity. Last night as I was looking at the moon approaching Jupiter, with distant Pluto hiding behind it, and Saturn, I scanned along the ecliptic and saw Mars over to the East.

Living in California on the coast brings with it an evening mist this time of year and not but the brightest objects are visible in the night sky. As I continued gazing, I noticed a bright point between Mars and the others and it drew my attention. I had to pause for a minute and think about it. There really wasn’t much visible in the way of stars elsewhere in the sky at that moment.

What rather bright object could it be? I know there aren’t any planets visible currently in that area. Neptune is there in Aquarius, but that wasn’t what I was seeing. And then it hit me… I was looking at the Royal Star Fomalhaut. Fomalhaut, along with Antares, Aldebaran and Regulus, is one of the Fixed Stars that mark solstices and equinoxes. The Sun appears near Fomalhaut at the time of the Solstice in December.

At any rate this struck me as another synchronicity coupled with recent questions that have also come to light with respect to the Age of Aquarius. Fomalhaut is located in both the constellations Pisces Austrinus, as the head of the fish, and in Aquarius, as the foot of The Water Bearer.

So… What have we got to draw from as far as indicators and lines of thought about this? We certainly can’t rest assured that the song and dance in James Rado and Gerome Ragni’s 1967 play Hair and performed by the musical group called the 5th Dimension was “the dawning of the Age of Aquarius”.

Astronomers and astrologers may agree that the Age of Aquarius starts when the vernal equinox point moves out of the constellation Pisces and into Aquarius. But when will that be? There’s no truly definitive answer.

According to Bruce McClure and Deborah Byrd at EarthSky,

“The Age of Aquarius is not part of astronomy. It’s an astrological age, which occurs because of a real motion of Earth known as the precession of the equinoxes, which, for example, causes the identity of the Pole Star to change over time. The cycle of precession lasts 25,800 years, and there are 12 constellations of the Zodiac. So, roughly every 2,150 years, the sun’s position at the time of the March, or vernal, equinox moves in front of a new zodiac constellation. The Age of Aquarius begins when the March equinox point moves out of the constellation Pisces and into the constellation Aquarius.”

“First of all, we give the answer from an astronomical point of view. The International Astronomical Union (IAU) – which in the 20th century assumed the duty of officially naming and defining all things astronomical – created official constellation boundaries in 1930. From the perspective of astronomy, then, the beginning of the Age of Aquarius is based upon IAU constellation boundaries, which astrologers or New Age practitioners might or might not choose to use in their computations.

And further beyond that:

But again, although there is firm reckoning by many for the beginning of this astrological age, there is no agreement.”

In The Book of World Horoscopes, Nicholas Campion suggests that approximated dates for entering the Age of Aquarius range from 1447 AD to 3597 AD. Campion also reviewed published material on the subject from astrological sources and states that most writers claim that the Age of Aquarius arrived in the 20th century.

In their book Astrology, The Divine Science, Marcia Moore and Mark Douglas promoted the view that, although no one knows when the Aquarian Age begins, the American Revolution, the Industrial Revolution, and the discovery of electricity are all attributable to the Aquarian Age.

Vera W. Reid, in her book Towards Aquarius, suggests that many astrologers see the Age of Aquarius as that time when humanity takes control of the Earth and its own destiny as its rightful heritage, with the destiny of humanity being the revelation of truth and the expansion of consciousness, and that some people will experience mental enlightenment in advance of others and therefore be recognized as the new leaders in the world.

In The FAA Journal, Robert Zoller writes in his article “The Use of Archetypes in Prediction”, “Proponents of medieval astrology suggest that the Pisces world where religion is the opiate of the masses will be replaced in the Aquarian Age by a world ruled by secretive, power-hungry elites seeking absolute power over others; that knowledge in the Aquarian Age will only be valued for its ability to win wars; that knowledge and science will be abused, not industry and trade; and that the Aquarian Age will be a Dark Age in which religion is considered offensive.”

Others like Neil Spencer, author of True as the Stars Above, offer another view suggesting that the rise of scientific rationalism, combined with the fall of religious influence, the increasing focus on human rights since the 1780s, the exponential growth of technology, plus the advent of flight and space travel, are evidence of the dawning of the Age of Aquarius.

Ray Grasse in his book Signs of the Times, alludes to a “wave” theory of the shifting Great Ages suggesting that the Age of Aquarius will not arrive on a given date but is instead emerging in influence over many years, similar to how the tide surges forward incrementally rather than all at once.

Rudolf Steiner is said to have believed that the Age of Aquarius will arrive in 3573. In Steiner’s approach, each age is exactly 2,160 years. Based on this structure, the world has been in the Age of Pisces since 1413. Rudolf Steiner had spoken about two great spiritual events: the return of Christ in the ethereal world (and not in a physical body), because people must develop their faculties until they can reach the ethereal world; and the incarnation of Ahriman, Zoroaster’s “destructive spirit” that will try to block the evolution of humanity.

Even Gnostic philosopher Samael Aun Weor declared February 4, 1962 to be the beginning of the “Age of Aquarius”, heralded by the alignment of the first six planets, the Sun, the Moon and the constellation Aquarius.

From Pisces To Aquarius

The archeo-astronomer Sepp Rothwangl, in Considerations About the Start of the Age of Aquarius claims that, in ancient times, a new constellation rising on the eastern horizon before Sunrise on the morning of the Northern Hemisphere spring equinox was the main criterion for the start of a New Age. Rothwangl also states that such a change from Pisces to Aquarius has already occurred, thus indicating the arrival of the new Age of Aquarius.

For the past two thousand years, the sun has been located in front of the constellation Pisces at the time of the March equinox. That’s the significance of the so-called Piscean Age. At some point, the sun at the equinox will be in front of Aquarius. Is that when the Age of Aquarius begins?

What are your thoughts?

Are we in the Age of Aquarius?

Are we in the transition?

Or are we still waiting for it to begin? 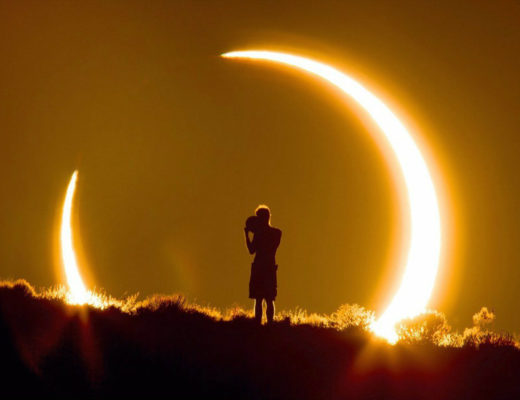 The Solar Eclipse and Your Alchemical Path 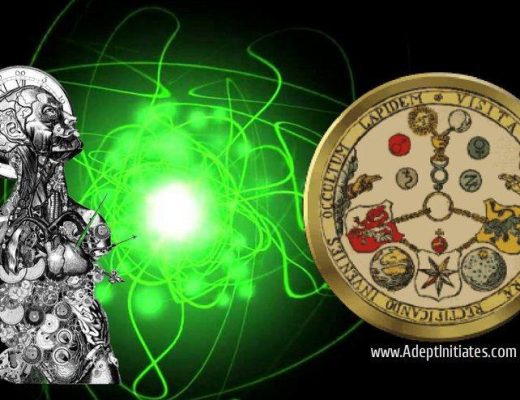