A lot of people mistaken synchronicity for mere coincidence, some would even argue there are no coincidences, I tend to believe in both, depending upon if we’re in sync or out of sync with the creative principals of the Universe.

When we are out of sync with the Universe everything seems to be happing to us or against us, probably shrugging off coincidences, never giving it too much thought. But when we’re in sync with the Universe, everything appears to be more fluid, more meaningful. We feel a sense of oneness, like we are actively participating in the creation of our lives. Even when things go wrong, there’s still a sense of trust, knowing the Universe is working with us, instead of against us. 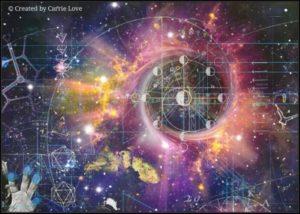 What if all coincidences are nothing more than a missed opportunity for synchronicity to take place? How do we know the difference between meaningless coincidence or meaningful synchronicity?

I like to think that our souls are fully capable of recognizing synchronicity, as it is often a very personal experience, understood intuitively, and likened to a multitude of minuscule things, that trying to explain the significance of the random occurrences somehow gets lost in translation, and the serendipitous effect it has upon us can never fully be understood by anyone else.

Synchronicity is often a ray of light in a world of darkness, and the timing is everything. Intuition, belief, and interconnectivity to Universal consciousness propels us into a fractal unfolding, this is the sweet spot where synchronicity is most likely to take place. And, in return, synchronicity propels our intuition, belief, and interconnectivity, allowing us to tap into Universal consciousness hence, the fractal unfolding.

Everything is numbers, the entire Universe is one big geometrical thought projection so, if certain numbers, or time prompts continually show up in your life, pay close attention, it’s the Universes way of trying to communicate. However, if we’re going through life uninspired and unconnected, if we’re focused on the material world, just going through the motions, we’re most likely lost in the matrix, we’ve become victim to its laws instead of transcending them.

Intuition and synchronicity are very much inner-connected, so much so, that it can often be hard to distinguish where one begins and the other ends. The more synchronicity we begin to notice, the more intuitive we become and visa versa.

This fractal entanglement is key for experiencing more synchronicity, because somewhere in it’s centripetal force of interconnectivity we’re able to merge with our higher selves, by tapping into our quantum, holographic mind.

When we get lost in creativity, when we love, when we feel connected, when we dance, when we listen to music, or what ever is that fills our spirit with inner joy and light, the individual I “ego” seems to fade away, and we experience bliss, because in those moments we’re able to return to our source, where time and space simply fade away. It is in this oneness that the matrix disappears, and we become active participants in our daily lives, we become a refraction of god; of light. 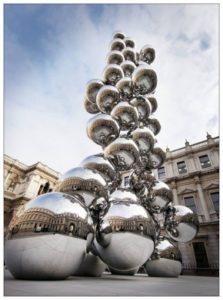 “The one who polishes their mirror refracts the creativity of the world the most intensely by being in sync with the creative principle of the world, which is God, which exists outside of time and yet in every moment. And this happens when the human creates like God, coming into sync with God, so that God acts through them, beyond their limited ego. This means to dream up a world like God, to give rise to it, to create, to imagine, to dream, but if one is in sync with God, one dreams like God dreams, in a way that is constantly changing, constantly taking in more and more of the world, loving it with the heart, exhibiting compassion, and wanting to liberate it all to be more Godlike, which is to say, to create for itself in a similar manner.”

The Universe has been communicating with us all along, but until we polish our inner mirror, its signs and symbols will continue being cleverly veiled and concealed, hiding in plain view right before our eyes, as it has always been since the beginning of time. The path of the initiate is to become one with god, not a reflection of outside influences, fears, and chaos, but a refraction of light and love. This should be our goal, to see ourselves and the Universe as one, full of unlimited potential, to see god as light, as a creative principle permeating everything, and when we do we become beings of light, able to travel at the speed of light, we become time travelers of a quantum mind.

April 22, 2017
Previous Post How Does Your Personality Affect Your Spiritual Path?
Next Post The Knights Templar Dighton Rock Connection