The Perfume Saint Exhibits His Wonders

To every thing there is a season, and a time to every purpose under the heaven. -King Solomon

A minuscule though qualitatively long two years had passed between Yogananda’s flight with his party toward the Himalayas, and the day which Sri Yukteswar‘s arrival into his life. For the lengthy duration of said two years, Yogananda had met several individuals rich in Knowledge of Self and the related disciplines thereof, including but not limited to the “Perfume Saint”, the “Tiger Swami” (which will be discussed in a different article at a later time) Nagendra Nath Bhaduri, Master Mahasaya, and the renowned and esteemed Bengali scientist, Jagadis Chandra Bose. One simpe yet but equally so dynamical and multidimensional philosophy promulgated by the Perfume Saint was:

God is simple. Everything else is complex. Do not seek absolute values in the relative world of nature.

This later led to the encounter of yet another intriguing character, another wandering Sadhu. The Sadhu had a discourse with Yogananda about the more refined and modified aspects to the perplexing complexity of duality (of twoness), specifically that of the classically cliche example, “good and evil”. He had stated that it was a riddle for the ages and had mystified and dumbfounded many wise-men and sages alike; those proceeding and those before—predecessors of those who engaged in such dichotomies. The wise one, the self-initiated or any another entangling relatability thereof will realize that and as also an Indian guru in the American-Chinese anime Avatar the Last Airbender had astutely suggested: one of the greatest illusions in this world is the idea of separation. Two or more things that seem dissimilar or antithetical are in fact, corresponding pieces to the same trunk of the same branch of the same tree. And two transcend duality and recognize the oneness of everything is what indeed the wise man will do and that is one step for escaping what in other discussion circles is called the Maya.

Yogananda and his related party were found present in Calcutta’s Kalighat Temple. The ancients Rishis had delineated practically uniquely nuanced patterns of spiritual living. But even they will still denunciate earthly toys and worldly affairs to instead devote time to the development and maturation of the Higher Self. But even in the West scientists, philosophers and mathematicians are consulting Jyotish, Vedic and other Indian cultures/sub-cultures/Indian Scriptures for revelatory truths about all three aforementioned fields of study and also physically and likewise metaphysically hardened realities about existence and defined lines of existentialism.

Enter the scene Gandha Baba (The Perfume Saint), who could give facilely the natural perfume of any flower to an odorless one, or revive any wilted sprout-ling or even make a person’s exterior, their skin emanate any specific fragrance. In a confounding yet salacious witty dialogue, Yogananda was asked by Gandha Baba if he would like to partake in smelling an array, a inventory of differentiating perfumes. The inquisitive Saint had gained the favor of Yogananda and he had agreed dually to  materialize a scent of his choice. And that he did. It took 12 years for the Saint to develop this ability, claiming that he attained through astral or non-physical means. Laughably, the curious Yogananda had responded to the Saint by saying he had wasted over a adecade of his life mastering something for which he could have otherwise effortlessly purchased for but a handful or inexpensive amount or rupees from any number of different florists’ shops. Yogananda requested a rose perfume, from the epicenter of his palm he began to notice the waft of a rose-like fragrance. Next, he had requested a jasmine fragrance, the saint readily displayed this artifact as it was interfaced hastily too.

Where did he learn this mastery, this Art? Vishudhananda, another name the Perfume Saint went by, had learned it ambiguously so, from a master in Tibet, of which said master had acquired to the age of over ten centuries, 1000 years of age. Different temperaments or emotional states of trance can affect how, when and what fragrance is materialized when it does materialize. Yogananda’s sister was witness to the aftermath of the Perfume Saint’s work, Uma was her name and she exclaimed she smelled precisely what he had gained from Vishudhananda: both the jasmine and rose fragrances. In a later interreflection, Yogananda had thought that potentially, the power of the Perfume Saint had happened as such by means of the power of auto-suggestion. What truths might be gleamed, gathered and elucidated from such a power? 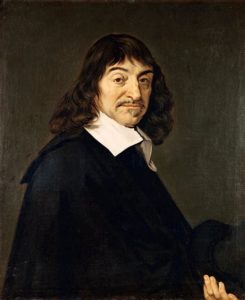 Pictured here is the world-renowned Mathematician-Philosopher Rene Descartes who was attributed for the philosophy of “I think, therefore, I am.”

Could merely the implanted idea of concept be sufficient enough of it to consolidate concentrated matter and condense it enough so to make what Rene Descartes‘ philosophy or Latin lingo cogito ergo sum a golden truth? “I think, therefore I am”? To what extent can this physically (exclusively physical and not entailing metaphysical means to do so) bridge the astral to the physical to the superphysical and manipulate even the most base subatomic particles and allow the individual to be the central pillar for augmenting, enhancing and malleable reality into any all different forms of construct? The Ancient Egyptians had argued that thoughts alone, no matter who, or what, no matter how impractically implausible, no matter how inarguably abstract or theoretical exist and they are electromagnetic in nature and indeed can affect reality. This only further compounds the truth of cogito ergo sum, as the Ancient Egyptians had exercised extreme caution when just present a mere thought in the Mind’s Eye. Further application of this philosophy could be the means to holistically and completely master what it means to have Knowledge of Self, and to any serious self-initiate a highly advisable scrutiny into such phenomena would be recognized as noteworthy to the striving adept.

The Yogi (the Perfume Saint) had also possessed another ability, reportedly he could extricate any object out of thin air. Yogananda had requested the Yogi to extract out-of-season tangerines. Almost immediately, the luchis which were present on all the banana leaf platos (Spanish for plate) resultantly, became expanded. Each bread contained a peeled tangerine. The question that may linger to the read then is to what degree Ascended Master Jesus Christ’s story of feeding thousands of hungry masses two fish…is their credulity to it and was Christ than only a master in the sense that he had mastered Knowledge of Self and to the ignorant man who has no such understanding of such happenings, would appear that Christ may be perceived as a God? But to the man who could levitate, perform telekinetic feats or become the aboriginal prognostication of some superhuman feat where does the line begin and end? What is truly possible within the human being?

Internationally renowned Mystic-Scientist Nikola Tesla who had several dialogues with Swami Vivekananda and had based nearly all his inventions on conceptualizations drawn from Vedic cultures, had famously remarked:

If you wish to understand the secrets of the universe, think in terms of frequency, energy and vibration. 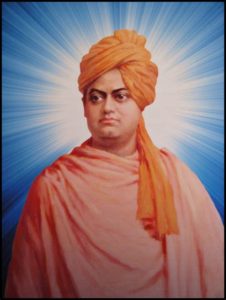 Pictured here is Swami Vivekanada, who had tutored Nikola Tesla in Vedic Scriptures.

Vibrations that transcend the five classically described body sensory systems are regulated by what Yogananda had arguably called “Lifetrons” (in other word it is called Ether, Prana, Chi, and to the Japanese Ki) and it is to this end the man who has inactive these faculties dormant [within all men and women who can through meditative discipline activate them] within the subconscious flesh of himself, will discover subtler life forces, super-subatomic energies intelligently charged with 5 distinctive idea-substances (or in another word the Rosaecrucian concept thought-form).

Gandha Baba, connecting to the cosmic force by certain yogic disciplines, was able to successfully channel the lifetrons to reorder their vibratory structure and objectivize to that end, the intend result. This perfume that he had then mastered, were simply mundane manifestations of ordinary vibrations and not inner sensations hypnotically produced.

Illusion works impenetrable, Weaving webs innumerable, Her gay pictures never fail, Crowd each other, veil on veil, Charmer who will be believed By man who thirsts to be deceived. -Emerson

French Chemist M. Georges Claude, performed ‘miracles’ at Fontainebleau in 1928 before a scientific convoke through his chemical knowledge of oxygen transformations. His wand was nothing more then oxygen, bubbling in a tube on a table. Claude turned a handful of sand into precious stones, iron into a state of resembling liquid chocolate and, after depriving flowers of their tins, turned them into the consistency of glass.

October 13, 2017
Previous Post Yogananda Saga - An Excursion to the Himalayas
Next Post Where did Baphomet Originate From?