Sylvanus Griswold Morley (June 7, 1883 – September 2, 1948) was a Mayanist scholar said to have made significant contributions toward the study of the pre-Columbian Maya civilization in the early 20th century. He made and directed extensive excavations of Chichen Itza on behalf of the Carnegie Institution, and published several treatises on Maya hieroglyphic writing. In his day, he was one of the leading Mesoamerican archaeologists, contributing greatly to publications on Maya calendric inscriptions.

In one of Morley’s publications, An Introduction to the Study of the Maya Hieroglyphs  (1915)  he states,

“Among all peoples and in all ages the most obvious unit for the measurement of time has been the day; and the never-failing reappearance of light after each interval of darkness has been the most constant natural phenomenon with which the mind of man has had to deal. From the earliest times successive returns of the sun have regulated the whole scheme of human existence. When it was light, man worked; when it was dark, he rested. Conformity to the operation of this natural law has been practically universal.
Indeed, as primitive man saw nature, day was the only division of time upon which he could absolutely rely. The waxing and waning of the moon, with its ever changing shape and occasional obscuration by clouds, as well as its periodic disappearances from the heavens all combined to render that luminary of little account in measuring the passage of time. The round of the seasons was even more unsatisfactory.
A late spring or an early winter by hastening or retarding the return of a season caused the apparent lengths of succeeding years to vary greatly. Even where a 365-day year had been determined, the fractional loss, amounting to a day every four years, soon brought about a discrepancy between the calendar and the true year. The day, therefore, as the most obvious period in nature, as well as the most reliable, has been used the world over as the fundamental unit for the measurement of longer stretches of time.”

Morley goes on to explain, “In conformity with the Universal practice just mentioned the Maya made the day, which they called kin, the primary unit of their calendar. There were twenty such units, 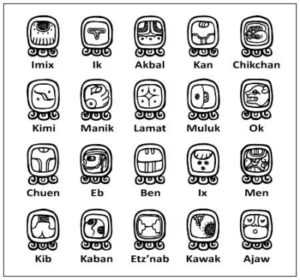 These followed each other in the order shown. When Ahau, the last day in the list, had been reached, the count began anew with Imix, and thus repeated itself again and again without interruption, throughout time. It is important that the student should fix this Maya conception of the rotation of days firmly in his mind at the outset, since all that is to follow depends upon the absolute continuity of this twenty-day sequence in endless repetition.
Merely calling a day by one of the twenty names just given did not sufficiently describe it according to the Maya notion. For instance, there was no day in the Maya calendar called merely Imix, Ik, or Akbal, or, in fact, by any of the other names just given. Before the name of a day was complete it was necessary to prefix to it a number ranging from 1 to 13, then and only then did a Maya day receive its complete designation and find its proper place in the calendar.”

While this concept may seam a little confusing at first glance, once you understand the sequences at hand, it becomes rather simple to comprehend. In closing Morley leaves us with three governing rules to remember:
Rule 1. The sequence of the 20 day names repeats itself again and again without interruption
Rule 2. The sequence of the numerical coefficients 1 to 13, inclusive, repeats itself again and again without interruption, 1 following immediately 13.
Rule 3. The 13 numerical coefficients are attached to the 20 names, so that after a start has been made by prefixing any one of the 13 numbers to any one of the 20 names, the number next in order is given to the name next in order, and the sequence continues indefinitely in this manner.

Explore with us on the Mystery of the Maya tour 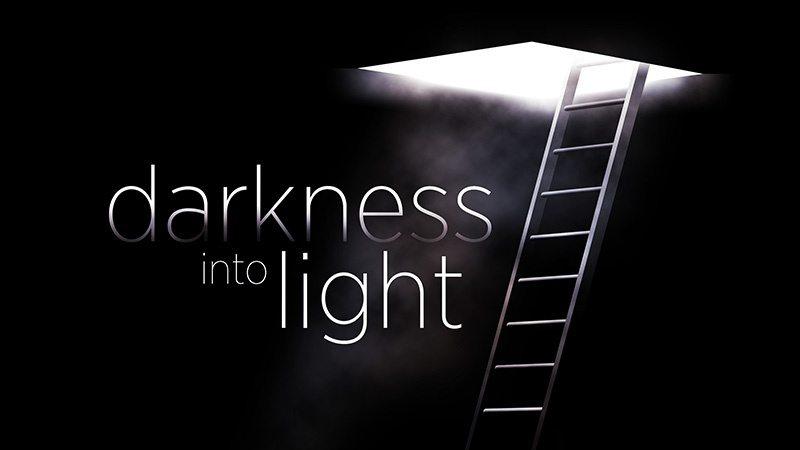 Welcome Adept Initiates – An Illumination towards the Occult 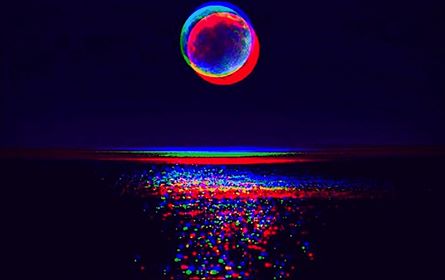 The Blue Blood Moon and The Dreamtime

September 5, 2017
Previous Post Tasseomancy: The Art of Tea Leaf Reading
Next Post Did The Ancient Sema Tawy Give Birth To Hermaphrodite Gods?