The history of mankind has been full of surprises, impossible achievements, and anomalous features that have left a mark on our civilization. While there are many things that history has helped us understand, there are some things that no one, not even mainstream historians have been able to fully understand. History has proven to be far more surprising than what many people believe.
Here below we have 6 of History’s greatest mysteries that continue to baffle mainstream scholars.

The Piri Reis Map and the maps that predate it

There are a number of archeological discoveries that question our past, this is the case of the map which was found in 1929, during the restoration of the Topkapi palace in Istanbul Turkey, which describes in high detail the geography of the American Continent with such a precision that it looks as if it was put together with the aid of aerial photography. However, the map was made at a time when mainstream history tells us there were no flying vehicles on Earth and mankind’s technology was very limited. The map composed by Ottoman admiral Piri Ibn Haji Muhiddin Memmed, aka Piri Reis is in fact part of maritime navigation collection called Bahriye which is basically composed by 210 partial maps, dated around 1513 and 1528. The perfection and details displayed on the map have been the subject of debate for years among scholars who cannot understand nor explain how this map even exists. Today, numerous enigmas remain about the Piri Reis map, especially in regards of Latin America and the Southern regions of our planet.

This Turkish Admiral did not only draw the outline of the nearly unexplored South American region, detailing rivers, mountains and lakes that were believed to be unknown at that time in history, but he managed to accurately depict the geography of Antarctica, a continent that wasn’t officially investigated until the twentieth century… The only thing we can conclude is that, somehow, someone knew how our planet looked like thousands of years ago from the air… and the Turkish Admiral managed to obtain this information and create the most enigmatic map we have discovered to date, a map that challenges history as never before.

The Shroud of Turin

The well-known Shroud of Turin is perhaps one of the greatest mysteries in modern-day history. According to claims from the Vatican, the Shroud of Turin isn’t an authentic artifact, but that hasn’t stopped people from further investigating the mysterious past connected with it. The imprint seen on the Shroud of Turin seems to depict the image of a bearded adult male. On the surface of the Shroud traces of blood are seen which suggest whoever wore it had a violent end. Many researchers believe that the Shroud of Turin belonged to Jesus Christ. The weave of the fabric suggests that it dates back to the time of Jesus Christ and the blood patterns present on it indicate to crucifixion as cause of death.

While many people doubt that it was the burial cloth of Jesus Christ, there are many researchers around the world who firmly believe that Jesus Christ came in contact with the Shroud of Turin in the distant past. The biggest debate surrounding the Shroud is the date of origin. Some scientists believe the shroud dates back to the 13th or 14 century, while many others believe it could be much older.

Whether the Shroud of Turin belonged or not to Jesus Christ, it surely remains as one of the biggest mysteries in history.

This ancient document which was named after Polish antiquarian Wilfried M. Voynich who discovered it in 192 in a monastery in Italy remains as one of the biggest mysteries in the history of mankind. The mysterious book, containing pictures and an unknown and undecipherable language is estimated to have been written around 800 years ago by an unknown writer using an unknown writing system.

Many believe that the Voynich manuscript is some sort of pharmacological book since many of its depictions illustrate ancient medical treatments, but strangely it also seems to contain an early cosmological map.

What has baffled researchers mostly about the Voynich manuscript is without a doubt the language or writing system it contains and the illustration of unknown plants and cosmological charts which has led many to believe it was a manual written by a being not from Earth. However there is a group of people who believe the Voynch manuscript is an elaborate hoax and that the words and depictions are meaningless and purely fictional.

This ancient text is currently located at the Beinecke Rare Book and Manuscript Library at Yale University and no one has been able to decipher it.

Gunung Padang: The Oldest Pyramid in the world?

Our list wouldn’t be complete if we did not mention lost civilizations, an unknown history and breathtaking constructions that challenge our modern day capabilities.

One of those ancient ‘lost’ civilizations could be around 20,000 years old and found in Indonesia. If these structures prove to be the real deal (they are being battered by mainstream scholars and tagged as a hoax) then we are looking at a whole new page in our history books, one that changes everything we know about civilizations, origin of mankind and humans on Earth. No one knew that the Pyramid was a pyramid until geological surveys were done in 2011.

According to stamens from Geologist Dr Danny Hilman could hide the remains of a lost temple that could date back 20,000 years. Hilman believes that the site (Gunung Padang) is of great cultural and historical importance since it contains the remains of a huge Pyramid that was built some 20,000 years ago, by a lost civilization, adding that it may have been built for worship or as a giant astronomical instrument.

The first radiocarbon dating was done by Danny Natawidjaja producing dates around 500 to 1,500 BC which was in the limits of accepted dates by mainstream scholars. However, everyone was in for a surprise when Natawidjaja and his team extended their investigation using tubular drills that allowed them to carbon date much deeper levels of the structure. The first samples showed evidence of manmade structures far beneath the surface. However, that wasn’t the most surprising discovery… organic materials which were brought up in the drill cores began to yield older and older dates – 3,000 BC to 5,000 BC and as the team drilled further down the dates were shockingly old… and at depths of around 90 feet, radiocarbon dating showed that the structure dates back around 20,000 BC to 22,000 BC.

Like many other discoveries in the past, Gunug Padang has been dubbed by many mainstream scholars as a hoax and nothing more. While studies seem to point otherwise, it seems that the mysterious Pyramid of Indonesia and the 20,000 years old civilization behind it will remain for some time, one of history’s greatest enigmas.

The Nazca lines are without a doubt one of the most mysterious features in South America. These enigmatic geoglyphs have captured the amazement of researchers and tourists alike. People have wondered what their real purpose was for years, yet no one can accurately explain their purpose and origin. Were these giant figures meant to be seen from above? Do hey mimic constellations in the sky? What were the ancient’s trying to say to future generations? Were the Nazca lines mere ancient art? If so… why would ancient mankind create art that cannot be fully appreciated from the ground? It seems that whatever way you look at the Nazca lines, trying to explain them while maintaining a close mind like most researchers is something impossible. What if the answer to the enigmatic Nazca lines is right in front of us, yet we do not want to accept it?

An important question we need to ask is, if the Nazca lines were actually ancient art, or a way for ancient man to communicate, than why are there magnetic anomalies present at the Nazca lines? According to reports, scientists from the University of Dresden researched the Nazca lines. They measured the magnetic field and they found changes in the magnetic field under some of the lines at Nazca. Electrical conductivity was also measured at Nazca where tests were performed directly at the Nazca lines and next to them and the results showed that electric conductivity was 8000 higher on the lines than next to them. According to the researchers approx. eight feet beneath some of the lines there are magnetic field anomalies. There is something at Nazca that makes it unique, different from any other place on Earth but we simply do not know what it is.

There are over 800 straight lines, 300 geometric figures and 70 animal and plant designs, also called biomorphs. The largest figure found at Nazca stretches about 200 meters across, while the longest glyph found at Nazca goes for 9 miles. 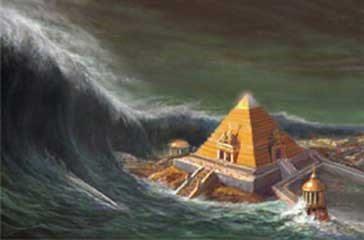 The first writings about Atlantis come from the famous book “Dialogues” written by the Greek philosopher Plato in the fourth century BC. According to Plato, the stories of Atlantis were passed to him by his grandfather, who had heard the story about ancient Atlantis from an Athenian statesman called Solon who learned about the existence of Atlantis from an Egyptian priest who claimed that Atlantis existed nine thousand years ago before that.

“Through violent earthquakes and floods, in a single day and night of misfortune … [the whole race] … was swallowed up by the Earth and the island of Atlantis … disappeared into the depths of the sea.” – Plato.
Since then, numerous hypotheses have circulated among scholars, researchers and explorers about the existence and mysterious disappearance of the city-continent.

While many people firmly believe that one day, someone will find the long-lost city-continent of the Atlantean empire, somewhere underneath our planet’s oceans, others believe that Atlantis was just the product of Plato’s imagination and that this mighty empire only existed in the famous book “Dialogues” written by the Greek philosopher. However since we cannot say for certain, Atlantis and the story behind it remains as one of history’s greatest enigmas.

Where did Baphomet Originate From? 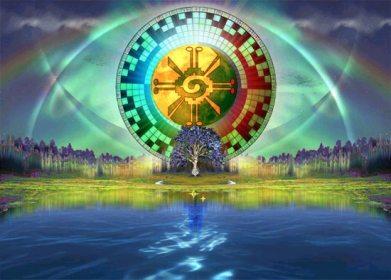 August 1, 2017
Previous Post The Emerald Tablets of Thoth the Atlantean
Next Post What is the Real Philosophers Stone?